Highlights from our April All-Day Tour

Our regularly scheduled whale watching and wildlife tours are approximately three hours in length, which allows plenty of time to view whales and other wildlife around the San Juan Islands. Several times throughout the year we offer special all-day extended tours. These tours are always an adventure and each one is uniquely different. We hosted our first of four all day tours of 2018 on Sunday, April 22nd.

We left Friday Harbor in the morning onboard our brand-new boat, J2, along with a wonderful group of new guests, old friends and plenty of food and drink to get us through the day. Consistent with the adventure of our all-day tours, we had no idea how the day would unfold, what we would encounter, and what beautiful areas we’d explore.

Wildlife at Spieden Island
There were many highlights throughout the day. We started with abundant wildlife at Spieden Island, including large rafts of Steller sea lions relaxing in the water. It was exciting to see them in abundance as they will soon be leaving the Salish Sea for their summer on the outer coast. We also encountered harbor seals, river otters, exotic deer and sheep on Spieden Island, bald eagles and many more bird species.

Humpback Whales Are Returning for the Summer
We continued our search and eventually came on scene with a humpback whale in the Strait of Georgia. Humpback whales spend their summers in northern latitudes feeding on herring and other small bait fish. We typically see them returning from their breeding waters in early April and this week we had our first arrivals, just in time for our all-day tour! It was extra special to see this familiar humpback because it is one we’ve come to know over the years. With a signature dark fluke with large circular, white scars we identified this whale as BCX1193 “Zig Zag” who tends to show up right around Earth Day every year.

Going the Distance for Orcas
After enjoying some time with Zig Zag the humpback, we heard a report of killer whales approaching Vancouver, about 20 miles north of our current location. We were already in the Strait of Georgia and had made our way further northwest with the humpback. We were quite a distance from Friday Harbor but having the flexibility of the all day tour allowed us to go farther than we’ve ever gone to see orcas. We went for it and it paid off!

We caught up with the T100’s, including the T100B’s, and the T123’s off the north arm of the Fraser River. These two families of Bigg’s orcas are well known in the Salish Sea and we see them throughout the year. The 100B’s meant that we had 3 generations of family together, as well as T123 and her 2 offspring. T123A, Stanley, is now 18 years old and is a very big whale; his size makes it easy to forget he still has a little growing left to do. It was awesome to see him surface alongside 16-year-old sprouter male T100C.

We were treated to beautiful whales traveling in a tight group, surfacing in unison, with the Vancouver skyline and the mountains in the background. We made it just south of the entrance to Howe Sound, with the orcas passing in front of the snow-capped mountains of British Columbia. You could feel the emotion of our entire group. This was definitely a special experience. With everyone smiling it was time to start our long journey back to San Juan Island.

But Wait, There’s More
As we traveled back across the Strait of Georgia, we heard that one of the BC ferries reported seeing two humpback whales near Active Pass. That area offers incredible scenery and was kind of on the way home, so we decided to check it out. We had a beautiful finale with two humpback whales traveling close together, side by side. After watching a few breath cycles, they fluked in unison and we knew that was the end of another spectacular all-day adventure in the Salish Sea.

Join us for one of our special all-day tours this season
We have 3 more all day tours planned this season and space is very limited. If you’d like to join us on June 3rd, August 26th or September 30th, call us at 360-378-7996 to reserve your seats! You can also arrange your own all-day tour for your group on a private charter onboard J1, J2 or Imagine. You can also join any of our three hour whale watching & wildlife tours departing from downtown Friday Harbor and Snug Harbor Resort, on the west side of San Juan Island. 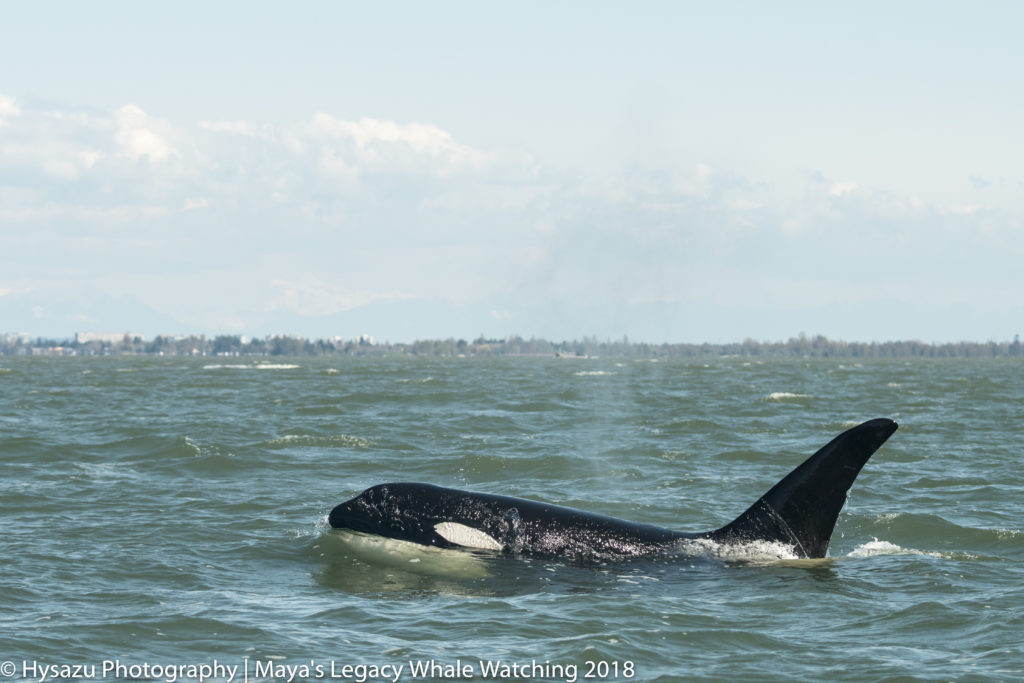 Species we saw on our all-day tour: